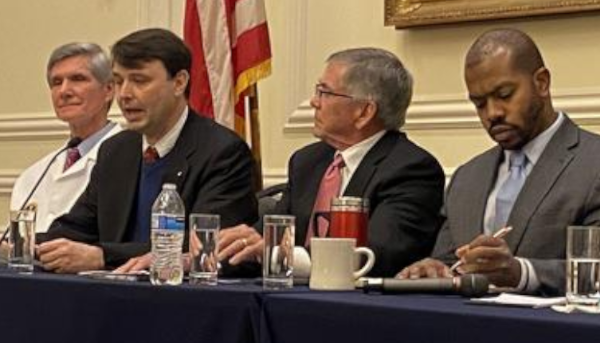 Bishop James Conley of Lincoln, Nebraska, and the leaders of five Catholic medical or professional associations on Thursday founded the Catholic Health Care Leadership Alliance, meant to support the reception and provision of health care in accord with Church teaching.

“This Alliance brings together the best minds in medicine, law, business, and theology. I look forward to working with CHCLA and my brother Bishops to guide and support CHCLA in this important work that will not only bring faithful medicine to our people, but bring our people to a deeper relationship with God,” Conley, chair of the group’s episcopal advisory board, said in a statement.

He added that it will “serve as a reliable and trustworthy resource for bishops to turn for assistance, information, and support; so that bishops can properly and more effectively exercise their pastoral office in overseeing health care ministry in their diocese. They will be better equipped to help facilitate an atmosphere of mutual understanding, fruitful collaboration, and ecclesial communion with the health care leaders in their dioceses.”

The alliance’s inaugural event was held at the Washington, D.C., campus of Hillsdale College, a liberal arts college founded by Free Will Baptists but which has now has no affiliation with an ecclesial group.

Franciscan Health, a healthcare system operating in Indiana and Illinois, is the alliance’s first system member.

Sister Jane Marie Klein, O.S.F., chair of the board of Franciscan Health, commented that “Our sacred obligation to attest to and uphold the moral teachings of the Church concerning the sanctity of life throughout its natural progression from conception until natural death is being challenged by those who wish to secularize all health care providers. CHCLA is being formed to be a beacon of light and truth, an organization that will defend the right of faith-based providers to deliver care in concert with their religious beliefs.”

“A disproportionate number of people in our country, the poor and the elderly, the marginalized, and those without a voice struggle to receive adequate care. CHCLA wants to be their advocate. Franciscan Alliance is proud to be a part of an advocacy forum that defends both the dignity of all persons and religious freedom,” she added.

Dr. Steven White, president of the alliance, said that “to uphold the truth of the Catholic faith in the practice of medicine there is an urgent need for a clear, strong, and united voice to promote and defend medical care practiced in harmony with the mind of Christ and the long-standing tradition of His Church.”

A pulmonologist and director of respiratory Care at Halifax Medical Center in Daytona Beach, Florida, White called the coalescing of the alliance’s member organizations “an inspiration of the Holy Spirit” that comes at a time when Catholic health care is facing an “existential threat.”

“It’s so necessary that we come together, as I like to refer to it, as the Body of Christ,” White said. “We can’t stay in our silos any longer.”

Joseph Meaney, president of the National Catholic Bioethics Center, said the alliance’s formation comes a “providential time when ethical challenges in health care are growing, and it gives a voice to many organizations and individuals who strongly support Catholic values in health care, by having an alliance of national organizations to represent them.”

The founding president of the Catholic Bar Association, Joshua M. McCaig, said it is hoped that “this Alliance, and the expertise brought by its members in the areas of medicine, law, policy, advocacy, education, and bioethics, will serve as a unique resource to health care providers, patients, the Church, and our country. It is imperative that the dignity of those called to serve the sick is protected and defended so they may practice their profession in accordance with their conscience, their faith and their beliefs, as well as for patients who seek out providers who share the faith and expect treatment options consistent with their beliefs and values.”

Douglas G. Wilson, CEO of the Catholic Benefits Association, spoke Thursday about the recent disclosure in a federal lawsuit, reported by the National Catholic Register in November, that the U.S. Department of Health (HHS) is developing sweeping new regulations that would require U.S. health care providers to provide abortion and gender-transition services, without any religious exemptions.

Brown said the fight to preserve religious exemptions for faith-based health providers to offer “pro-life care” promises to become “the biggest pro-life battle” in the nation.

ORIGINAL ARTICLE CAN BE FOUND HERE.